The Romanian Deadlift (AKA RDL) targets the hip extensors (glutes) and the knee flexors (hamstrings). It’s one of the most effective ways to load your hamstrings, so whether your goal is increasing muscle, strength or athletic performance, the RDL can help to bulletproof your hamstrings.

Similar to the conventional deadlift, the Romanian Deadlift (RDL) recruits a lot of muscle mass, and is one of the best exercises when loading a hip hinge movement. In this section, we’ll break down some of the main reasons why you should include the RDL in your workouts.

The RDL loads all muscles in the posterior chain — the glutes and hamstrings are the prime movers, while the upper and lower back must maintain tension throughout the lift in order to keep a neutral spine. As the movement works so many muscles, some serious posterior chain strength gains can be achieved through progressive overload if performed correctly and consistently.

Some variations that can provide similar benefits:

The main movement involved in the correct execution of the RDL is hip extension. This movement is fundamental in many sporting movements, since powerful hip extension will lead to a more powerful jump and faster running. The RDL also significantly loads the hamstrings, responsible for knee flexion, which is another key movement involved in athletic performance. Essentially, it can help to make you faster and stronger in your sport.

The hamstrings commonly suffer from strains that occur as a result of overloading during the eccentric phase of exercise. A good example is strains during sprinting, when the hamstrings are too weak to withstand the load imposed upon them. Exercises such as the RDL, which preferentially load the hamstrings through a broad range of movement, can significantly reduce this risk of injury by strengthening tissue so it can withstand higher loads.

Position your feet slightly narrower than hip-width apart, keep your back straight, look forward and grip the barbell with your hands around shoulder-width apart. You can grip the bar using overhand, mixed grip, hookgrip or use straps — this depends on personal preference and what works best for you.

Bend your knee slightly at the =joint and pinch your shoulder blades together. Maintaining a neutral spine, slowly lower the barbell, flexing only at the hip.

Once you are at the bottom of the movement and you feel a deep stretch on the hamstrings, concentrically contract the hamstrings, maintaining a neutral spine until you reach the starting position, prior to initiating the following rep.

As with any exercise, poor form will limit your progress while also increasing the risk of injury. We’ve outlined some of the most common faults when performing RDLs, along with some simple guidance on how to fix it.

Many physiotherapists argue that rounding your back when lifting is not inherently a cause for concern (eg this is one of the main elements involved in the correct execution of the Jefferson Curl), and believe it’s load tolerance that’s the issue. The problem is many people are simply unable to tolerate higher loads with a flexed spine without feeling some sort of discomfort or pain. The solution to this is to simply maintain a ‘neutral’ spine when lifting, minimising the risk of pain and helping to strengthen the posterior chain in the process.

The best way to achieve this is with proper bracing, load management (using loads you are capable of maintaining) and cues such as pulling your shoulder blades together.

Not using full range of motion

Time under tension and full range of motion are two of the key driving factors behind increased muscle mass. By limiting these you will stunt training progress, and waste your time with inefficient training. For optimal results, make sure to use full range of motion — during the RDL you should feel a significant stretch on your hamstrings when in the bottom position, but this depends on your flexibility.

Not maintaining the correct positions

Not maintaining the correct positions when performing a lift will reduce effectiveness of the exercise. When performing the RDL, these faults include:

The barbell (or whatever apparatus you use) must remain in close contact with the legs throughout the lift — this will result in the hips being pushed back, but you should feel a stretch on your hamstrings. Many people allow the load to drift away from their legs, meaning that the lower back is then being forced to manage the load, reducing the loading experienced by the hamstrings.

The hamstrings are pivotal in a well-rounded physique and during athletic performance. While the RDL is a great exercise for effectively training the hamstrings and the hip hinge movement, below we’ve suggested some effective alternatives to achieve similar results.

This exercise can be performed using a barbell, dumbbells or even just as a bodyweight exercise. Since it’s a more hip-dominant exercise, it tends to load the glutes more, and while the range of motion for the hamstrings is not as large, it can still be effective for training the hamstrings.

This exercise requires a piece of equipment called a glute ham developer (GHD). You can load this exercise with weight plates, dumbbells or even just perform it as a bodyweight exercise. Technical mastery is important for this exercise, since it can easily become a lower back exercise if performed with different technique. 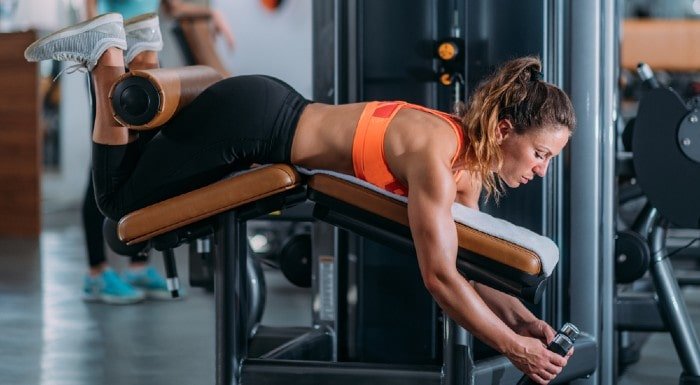 While the RDL provides significant stimuli for the hamstrings, it’s also a hip-dominant movement, meaning the glutes are one of the prime movers. Hamstring curls can be performed in a seated, lying or standing position, depending on the apparatus used, and they offer a great alternative as they solely load the hamstrings.

This exercise is most commonly performed using a barbell with plates, but can also be executed effectively with dumbbells, resistance bands or cables. Because a larger number of muscle groups — and so a greater volume of muscle mass — are used during this exercise, you will tend to be able to use more load during this exercise. This is not solely a hamstring exercise, but can be very effective when developing posterior chain strength.

The RDL is a fantastic exercise when it comes to developing posterior chain strength, although you may require higher degrees of flexibility in order to get the most out of it. Whether you’re looking to improve your athleticism or develop a more well-rounded physique, the RDL is for you!

Scott developed a passion for sport and performance through competing in long‐distance running and bouldering prior to attending university. Scott’s academic achievements include a BSc honours degree in Sports Therapy and an MSc degree in Strength and Conditioning. He is also a member of The Society of Sports Therapists and CIMSPA. Previously, he has worked with amateur and elite athletes, ranging from university sports teams to elite rugby league athletes and Team GB rowers. He currently works with various gyms in developing and delivering training programmes for amateur athletes and gym‐goers. While passive treatments remain in his arsenal as a Sports Therapist, Scott uses his skills to promote physical activity for combatting obesity, lower back pain and other sporting injuries, and simultaneously providing programmes for athletic development. Being a recent graduate, Scott strives to gain experience wherever possible, offering advice and sharing knowledge along the way. He believes it is important to practice what you preach, so in his spare time, Scott practices Olympic Weightlifting and enjoys being active outdoors in all weathers, although he still believes it is important to make ample time for social activities.

How To Eat and Drink Like a Professional Footballer

What Is Collagen Protein | What Are The Benefits?