Plant-based milks have surged in popularity in recent years. While alternative milks, such as almond, soy, and cashew milk, have been readily available for some time, it’s other non-dairy options that have been making a splash, with oat, rice and coconut increasing in popularity. Whether your priority is nutritional value, animal welfare, environmental impact, lactose or dairy milk allergens, or it’s simply a matter of taste, you’re spoilt for choice with options. In this article we’ll take you through eight of the best vegan alternatives to find the best plant-based milk. 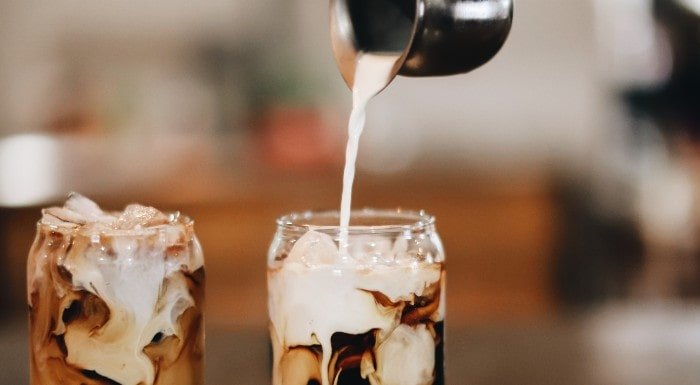 Slightly sweet and nutty in flavour, it’s often popular as it’s low in calories and fat. Its almond content is typically around 2%, so it’s actually very low in protein, and it’s a much less concentrated source of beneficial nutrients than whole almonds due to its usually high-water content. Cashew milk: Very creamy in consistency; most of the fats are the healthy monounsaturated form.

Also, very creamy in texture, it has one of the lowest carbohydrate and protein contents of all milk alternatives. It has a high fat content, with mainly 90% saturated (the one you don’t too much of) fat. It also has a high number of medium-chain triglycerides (MCTs).

Sweet and nutty, hazelnut milk contains relatively high calories, fat and carbs, and is low in protein compared to other plant-based milks. It does taste great, though.

Slightly sweet, nutty and thin in texture, it contains similar amounts of fat to cow’s milk, but around half the calories and protein (but it is one of the few plant-based sources of complete protein).

Mostly water and typically only 3% macadamias, this is one of the more recent milk alternatives on the market. It is richer, smoother and creamier than most non-dairy milks. It is low in carbohydrates and protein, and is a great source of healthy fats.

Naturally sweet and mild in flavour, it tastes great with cereals and in smoothies. It has double the amount of carbohydrates and half the amount of protein of cow’s milk. Oat milk has one of the highest amounts of fibre out of all the milk alternatives.

Rice milk is the least allergenic of all the non-dairy milks. It is high in carbohydrates and calories, contains little protein, but is low in fat. It’s also great in smoothies.

The taste can vary between brands, but soy milk is the closest non-dairy alternative to cow’s milk in terms of protein quantity. It’s one of the few milk alternatives to be a complete source of protein, which means it contains all essential amino acids.

Well, now you know all about non-dairy milk and all its worth, you’re in a great position to choose which is the best for you. Soy milk’s a good option if you’re looking for something nutritionally similar to the real thing, almond and cashew milk are low in calories and fat, nearly all provide some form of unique nutritional benefit, and they all taste great. Cheers!

Soy milk is the best milk alternative due to it being as close in all macro and micro nutrients to cow’s milk than the other. Widely used as a substitute for cow’s milk, soy milk is notable the anti-carcinogenic properties of phytonutrients present in the milk known as isoflavones. Nutritionally, it has lower calories than cow milk, less fat and carbohydrates, and almost as many proteins.

Cow milk itself has been quite controversial as a food, though most researchers now agree that it is a wholesome food, containing all major nutrients like fat, carbohydrates and proteins. Milk also helps humans by providing a number of host-defence proteins that can help protect the body against some microbial infections. Ultimately it is the individual’s choice whether they go for a dairy alternative or just stick to cow’s milk. But these are eight of the best plant-based milk alternatives.

Who knew you could do so much with whey?

“I Am Not Disabled For Having Less” | Xabi Osa: The Locker Room – Episode 4

See how this athlete refuses to let anything hold him back from achieving greatness.

A protein-packed smoothie for every occasion.

Jenaed Gonçalves Brodell is a well know Registered Dietitian (HCPC) and Sport Scientist. She is a fitness enthusiast and comes from a semi professional field hockey background. Her passion for sports nutrition and background in the sporting arena making her relatable to many amateur and elite sports personnel. She has experience working for the NHS & in South Africa as a consultant dietitian. She provides evidence based, easy to follow, practical advice and guidance.She has experience in the Paediatric field specialising in sports performance for junior and adult athletes. Her writing background comes from extensive researching throughout her career finding the most up to date information and translating it into easy to understand information for the public. She shares information on her public instagram page @nutritionaldco_ on the latest in evidence based nutrition.

How Much Protein To Build Muscle? | Your Ultimate Guide