Our bodies breakdown and synthesize various molecules (including muscle building proteins and body-fat building fatty acids) every day, whereby the source of the calories in our diets can tip the scales in either direction.

Saying that, all calories aren’t created equal and the differences in metabolism of protein, carbs and fats can’t be ignored. Notably the energy surplus/deficit from carbohydrates plays a major role in muscle growth/fat-loss due to their effect on the release of the storage hormone, insulin. So put that pop tart away, find out more about carb cycling so you can start losing fat while gaining muscle.

What is Carb Cycling?

Carb cycling is simply a nutritional strategy where the amount of consumed carbohydrate varies on a daily or weekly basis. It is not a diet programme with strictly defined guidelines but a loose concept advocating days of low, medium and high carbohydrate intakes. Lack of strict definition can be a little confusing as you will see people referring to “carb cycling” when using keto-genic diets (less than 50g of carbs a day) with weekly carbohydrate re-feeds as well as simply throwing in extra carbs post-workout on training days.

Putting the terminology aside you might be wondering why so much attention is paid to carbohydrates? You must know that the ultimate faith of carbs is breakdown to glucose and absorption to the blood-stream, raising the blood-sugar level. This elevation stimulates the release of insulin from the pancreas, which signals the peripheral tissues to absorb glucose, thus reducing blood-sugar levels. However the release of insulin affects a much wider range of metabolic processes, some of which have been shown in the table below.

Looking at these few points you can clearly see that insulin puts your body in a storage mode, where both fat and muscle cells get a fair share of stock. Keeping carbs high 24/7 allows insulin secretion to shuttle nutrients wherever it can and your physique will likely reassemble a sumo-wrestler rather than a shredded bodybuilding pro. That’s where carb-cycling benefits can come to play.

Carb-cycling can be used for both fat-loss and weight gain. The major difference is the number of low-carb days, giving either a net value of calorie deficit or calorie surplus.

By adding a few low carb days during your mass gain programme, you give your body a chance to trim down on some body-fat (due to reduced lipogenesis and increased fatty-acids break-down) you might be putting on.

On the opposite side, by adding a few high carb days during your fat loss programme, you create an anabolic environment; possibly gaining some muscle and definitely holding onto more mass (due to increased amino acids uptake, increased protein synthesis and reduced protein breakdown).

In both of the scenarios, over a week’s time you will be simultaneous losing fat and gaining/retaining muscle.

It has been well documented that long periods of low carbohydrate intake can decrease the thyroid hormone levels (T3), leading to a reduction in Basal Metabolic Rate (amount of calories burnt at rest) which makes it difficult to overcome fat-loss plateaus. Planned, high-carbohydrate day will bump up the T3 production, up-regulating your metabolism and allowing you to shred even more body-fat.

What’s more, low carbohydrate intake (30% of calories coming from carbs) has been shown to decrease the free testosterone to cortisol ratio following intensive training in as short as three days. This may lead to over-training and other unpleasant side-effects of low testosterone levels. Again, by throwing in higher carb days here and there, you’ll be able to raise the anabolic-testosterone to catabolic-cortisol ratio and welcome back the gains.

Carbohydrate over-feeding can also raise leptin levels – the ‘satiety hormone’ which becomes produced at the lower rate in response to shrunk fat-cells (fat loss). Obviously being less hungry for few days after a high carb day will help you to stick to your diet and keep losing the love handles.

Similarly, having a good mood following a higher carb day may be helpful in both training motivation and diet adherence. Insulin may help with that by making the tryptophan; pre-cursor of ‘good mood’ neurotransmitter (serotonin) more readily available for the brain.

A few days of low carbs combined with hard training can significantly reduce the amount of glycogen stored in your muscles. This increases the production of an enzyme called glycogen synthase, which works extra hard to turn every little glucose it can into glycogen (which is stored in muscles and liver). Once you raise your carb intake, it will take a while for the body to recognize that there is enough glucose around for the enzyme to take it easy. Meanwhile your muscles will soak up carbs like a sponge, storing glycogen above its normal capacity- Meaning fuller, harder and bigger muscles. Sure, this effect may not be permanent but timed right it makes a dramatic difference when it comes to taking the clothes off for a stage or photo-shoot.

How to Carb Cycle? – Diet Guideline

As previously mentioned there are no strict guidelines on how to carb cycle. Furthermore the terms “low”, “medium” and “high” carb are very subjective. Thus, for some 400g of carbs might be considered medium, whereas for others it might be sky-high, depending not only on body-weight but also the physical activity levels and basal metabolic rate. 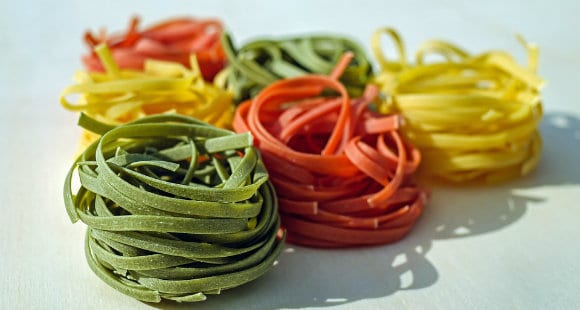 Below you can find a table detailing my carb-cycling recommendations, which take into account a typical 4-day training split. 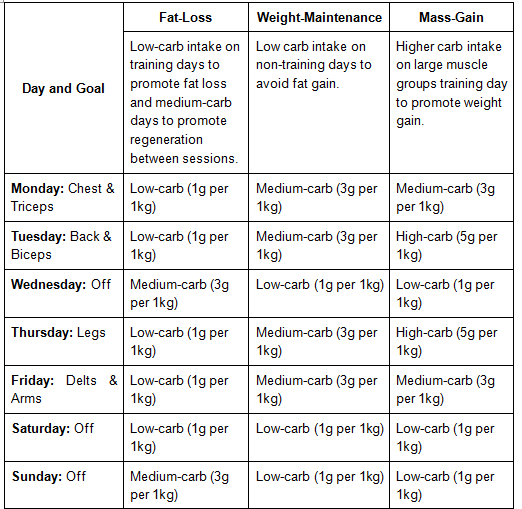 To summarise, carbohydrate cycling can be yet another nutritional strategy for achieving a balanced diet for muscle gain, fat loss or simply weight maintenance- but remember its not the only strategy and everybody is physiologically different when it comes to diet and progress.

How To Make A Protein Shake

High Altitude Training | What It Is & Benefits for Endurance Athletes

The Best 6 Supplements For Muscle Gain