Welcome to the Road to G.O.A.T.(greatest of all time), where we interview athletes who have reached the highest of highs in their respective sports and events.

If you haven’t already heard of Daniel Scali let us introduce you to a man with an iron will. And core. The Australian currently holds the record for the world’s longest abdominal plank. It stands at a whopping nine hours, 30 minutes and one second. Amazing. Only heightening his achievement Daniel took the title despite a complex regional pain syndrome following a childhood accident.

We spoke to Daniel to find out just how the hell you develop the patience, strength, and pain threshold required to for such a world record. 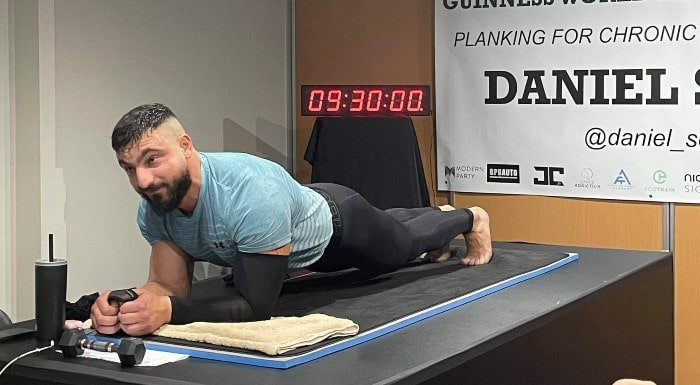 Daniel explained to us what complex regional pain syndrome is like. It came about after he fell off a trampoline at 12 years old. Since then, after his bones healed, he’s been in constant pain. As you can imagine, this had a huge impact on Daniel’s teenage years as he couldn’t always do the same things as his friends.

“My nerves or my brain were sending the wrong signals to my arm”.

Daniel explains it’s like his brain was saying “’you’re moving your arm, don’t do that!’ It sends a pain signal back to my brain to alert me saying that’s wrong, stop it.”

Daniel made clear that his life changed when he had his accident, and in accepting that, he’s been able to adopt a pretty amazing mindset.

“I wanted to use that pain as my own fuel… Like you can convince yourself that without the pain you’d be less better off. So that’s what I’ve sort of had to do. I’ve learnt to accept that it’s going to be with me forever.”

“You use it or you lose it”

“Growing up and always hearing from my physicians and doctors and all the rest of it, that either you use it or you lose it”

This marked the start of Daniel’s fitness journey. And having some form of routine and being able to take things on himself helped him a lot.

“I’ve always had to do physiotherapy, light weights, eventually I thought well, I’ll take it upon myself to go to the gym by myself. That helped me immensely.”

Daniel started doing a plank at the end of every workout. It just kept escalating. The plank even provided some-what of a distraction from the pain. 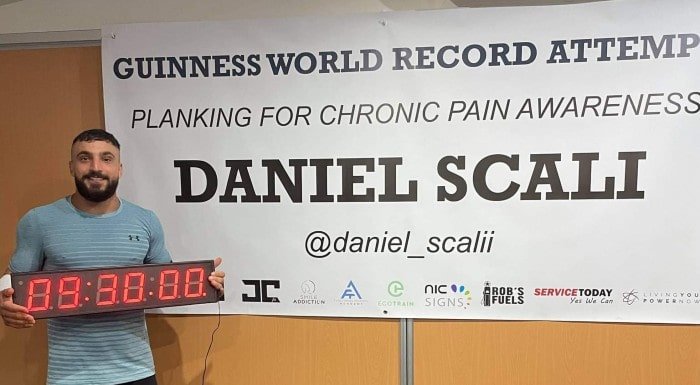 “Every day I had to do better…”

Of course, Daniel realised it would take more than conditioning his shoulders and abs. A lot of training was needed.

“I started off small, a few hundred push-ups a day, few hundred sit ups a day, 30 minutes of plank a night and I made a promise to myself in my journal, every day I had to do better than what I did the day before.”

This might not sound very small for a lot of people, but when attempting to break a world record, you’ve got to push yourself.

“When I was doing about a 5 and a half hour plank a night and I was doing maybe 600 push-ups, 600 sit ups, 600 arm curls, training for about 45 minutes in a weights session at lunch and then doing like a cardio, core class in the morning with my running as well.”

That’s quite the training schedule…

Daniel explained to us that because of his condition, a pain flare up can cause serious damage, and had the potential to end his world record journey early with threats of hospitalisation. But avoiding a flare up like that wasn’t his only worry.

“I remember the 14-minute mark. I just remember my thighs starting to burn and that’s very uncommon. Like as soon as I put that pressure on my arm and my elbow, I felt that pain come up, I know what to expect there. Going through my shoulders. But I haven’t necessarily felt my thighs before.”

We can imagine any sort of pain at the 14-minute mark of a nine hour and 30-minute plank would be cause for concern. Daniel pushed through but things did take another turn for the worse.

Daniel was sick, but incredibly he managed to not break the plank.

“A space that I’ve created myself”

Daniel broke the record with his mind coach close by. They had already created some ways in which Daniel could overcome the pain, both mental and physical.

While this effect wouldn’t last it certainly helped for the next 20-30 minutes and restored Daniel to the zone. At the start of every hour, Daniel practiced a very specific technique.

“A space that I’ve created myself. I’d go into that space where I’d be relaxed, cool, calm and collected. I’d be able to re-group all my thoughts, re-structure how I feel. That would also give me another 15 or 20 minutes of that relief.

The main objective of breaking the world record for Daniel was to raise awareness and to raise 10,000 AUD for Pain Australia. Well, he well and truly smashed that record by doubling it and raising 20,000. All whilst pushing his message of using pain as fuel.

“At this stage I would love to continue to raise awareness for complex regional pain syndrome and people dealing with chronic pain. My main objective of doing the plank was to show people that no matter what you suffer, no matter what you go through, if you put your mind to it and use pain as fuel, you can do it.” 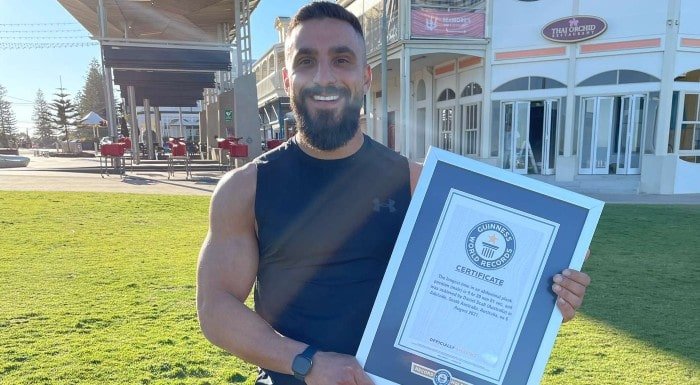 This is Daniel’s advice to anyone who is thinking about setting a goal for themselves. “Start Small”. And no, this time small doesn’t mean 100 push-ups and sit-ups every day.

“Start small. Ten-minute walk around the block or something like that. Just do that. And then every day do a little bit more. Make sure the next time you go for a walk you do a ten-and-a-half-minute walk, just try and keep active”

Whether you’re suffering with chronic pain or not, see this as your sign to set yourself a goal and work towards it. If Daniel can complete a nine-hour, 30-minute and one second plank, then you can set yourself a goal. And you can achieve it.

Some final words from Daniel when your body wants to give up.

“It’s the feeling that you do have after you’ve achieved something, or set yourself that little goal and you’ve done it. Especially carrying a burden with you. You can’t explain the feeling of enjoyment inside.”

Meet Jamie: Decorator Off The Pitch, Decorated On It

What Is Milk Protein?