Creatine is a popular supplement used by athletes and gym goers with tonnes of evidence to back it as one of the most effective supplements for improving strength, speed and muscle mass.1 However, one of the most prevalent side effects of creatine is weight gain.2 But this isn’t necessarily a bad thing, or the kind of weight gain you might be thinking of.

In this article we’re going to break down the facts and answer your questions surrounding weight gain caused by creatine, so let’s get into it. 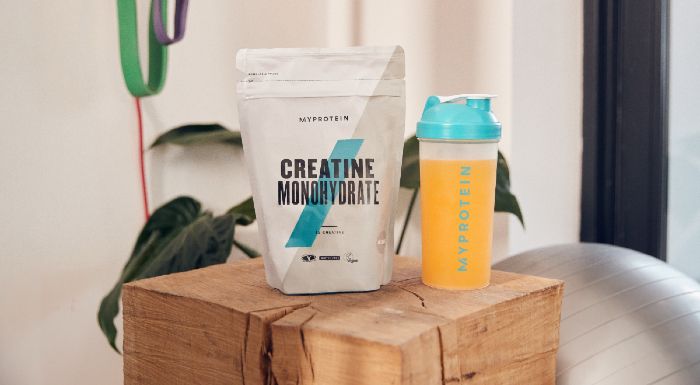 An average 70kg male will typically store approximately 120g of creatine in their body. With supplementation it’s possible to increase this storage around 160g.1 When your creatine storage is maximised, this is when you’ll see the performance enhancing effects of increased strength, power, muscle mass and improved recovery.1

How does creatine work?

Supplementing creatine increases the amount of phosphocreatine (PCr) storage within the muscle cell which acts as an energy source during high intensity exercise such as weight lifting. Essentially, increasing your phosphocreatine storage will allow you hit more reps and recover better between sets, which in time, leads to increased gains in muscle mass.

In order for your body to produce phosphocreatine in skeletal muscle, creatine must enter the muscle cell via the bloodstream.3 As creatine enters the muscle cell it may draw water into the cell resulting in water retention and weight gain.4

Does creatine make you fat?

In short term studies, the evidence shows that creatine will increase body mass, especially if following a loading protocol.4 This will most likely be due to water retention in the muscle cell. In this instance, this is actually a good sign as it is an indication that your creatine stores are increasing which will lead to performance benefits.

In the long term, there will likely be a weight gain due to increased lean muscle mass.1 Maximal creatine store will increase exercise capacity (sets and reps) and improve recovery leading to improved training quality which will ultimately lead to an increase in lean muscle mass, which is definitely a good thing!

In the short-term, the weight gained during creatine supplementation will not be lean muscle but water retention in the muscle cell. The training adaptations occur once your body’s creatine storage have been maximised. Essentially, full creatine stores will allow you to hit more reps and recover quicker, leading to long term gains in lean muscle mass.

Teamed up with resistance training, those supplementing creatine will typically gain more muscle mass than those that don’t. The evidence suggests that this could be as much 1.8kg after 12 weeks of training.1

Find out whether creatine is right for you in our quiz…

In the short term, creatine supplementation may increase total body weight. This is most likely due to water retention in the muscle rather than an increase in muscle or fat mass. Long term creatine alongside resistance training can lead to greater lean muscle mass gains due to increased training volume and recovery.

So, for whatever “water weight” gained, it’s probably worth it for the gains creatine makes in the long-term.

Want to hear more about creatine?

Protein Before or After Workout? | Pre & Post-Workout Shakes