In case you hadn’t heard of him, Phil Heath has won the Mr. Olympia title more times than we can count on one hand, which makes him one of the best professional bodybuilders in the world. The dietary supplements used by the man with the world’s best body can therefore be considered by all individuals that are interested in optimising their nutrition and training.

Phil reports that during his pre-contest preparation, alongside whey protein and branched-chain amino acids, he’ll consume another supplement up to three times per day – L-glutamine.

And Phil isn’t on his own, either. Many athletes and gym-goers hail L-glutamine as one of their favourite supplements.

But what is L-glutamine? What does it do and how can it help you to improve your performance and physique? Read on to learn more.

You’ll find in this article:

What Does Glutamine Do? Muscle Growth

What Does Glutamine Do? Immune Boost

How Does Exercise Effect Glutamine Levels?

What Are The Benefits Of Glutamine To Me?

Where From & How Much?

Glutamine (often called L-glutamine or 2,5-diamino-5-oxopentanoic acid) is the most abundant amino acid found in our blood[2] and makes up approximately 60% of the amino acid pool in our muscles[8]. It’s found in two different forms: D-glutamine and L-glutamine, and the L-glutamine variation is found in nature.

It is considered conditionally essential, which means that in certain situations its synthesis (production in the body) can be limited (e.g. in premature infants or those in intensive care). In this circumstance it means that it would need to be consumed in the diet via food or supplementation.

It is synthesised predominantly in skeletal muscle (approximately 90%) by a process facilitated by the enzyme glutamine synthetase from the amino acid glutamate and glutamic acid[3].

In healthy individuals, it can be produced with no problem in the muscles, which are able to produce, store and release glutamine as required to maintain the appropriate glutamine blood concentration[4].

However, during some situations, the production of glutamine homeostasis is threatened, glutamine reserves in skeletal muscle are depleted, and the important functions of this amino acid are inhibited. Such situations would include various forms of catabolic stress ranging from infection, surgery and, importantly, exhaustive exercise.

What Does Glutamine Do? Muscle Growth

Glutamine is an amino acid known for its role as a substrate for protein synthesis[5]. This means it’s used during skeletal muscle contraction when we exercise, and without its presence, our exercise performance and progress may be hindered.

This amino acid is an important anabolic precursor for muscle growth following exercise[6]. In fact, the anabolic effects of glutamine include both an increase in protein synthesis (muscle hypertrophy or increased number of muscle cells)[9] and increases in muscle cell expansion and filling with creatine, water and carbohydrate (muscle cell volumisation or “the pump”)[10].

The specific mechanisms of these benefits have not been fully explained, however, certain physiological actions have been attributed to glutamine concentration in muscle.

Firstly, increased glutamine content in muscle allows glutamine to suppress the oxidation (breakdown) of the branched-chain amino acid, leucine, and enhances the disposal of leucine without release of free radicals[9]. Free radicals are atoms with an unpaired electron which react with oxygen, resulting in cell damage.

The concentration of glutamine also promotes a positive nitrogen balance, which is required for muscle-protein synthesis[12]. There is also evidence that glutamine can also reduce muscle tissue catabolism (breakdown) by counteracting the effects of the stress chemical, cortisol. Cortisol is an adrenal stress hormone which can lead to proteolysis (protein tissue breakdown) and reduced physical performance[13].

What Does Glutamine Do? Immune Boost

The various other physiological roles of glutamine include facilitation of nitrogen metabolism, balance of acid-base levels in the kidney, and its position as an important fuel source for the immune system[7].

In situations of reduced glutamine production (as seen during illness), a subsequent reduction in the glutamine concentration in muscle and plasma occurs[7]. Research has demonstrated that supplementation of glutamine in such circumstances can lead to improvements in immune system function[14].

This is due to the fact that immune system cells (e.g. lymphocytes and macrophages) are fuelled either in equal measure, or more so, by glutamine (rather than glucose)[15-16]. Therefore, if glutamine levels are reduced, immune system cells will have a reduction in fuel source to work efficiently.

How Does Exercise Effect Glutamine Levels? 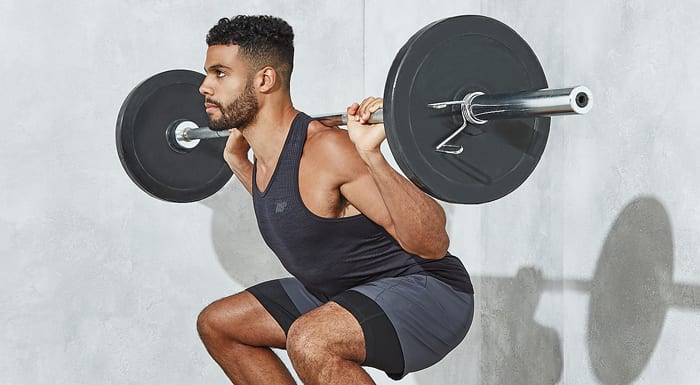 Training intensely or performing exhausting exercise such as marathon running, has a profound effect on the glutamine levels in your body. In fact, levels may decrease even as much as 20-30%[4].

A study showed that, following an intense eccentric strengthening session for the biceps, triceps, hamstrings and quadriceps, a significant reduction in blood glutamine concentration (24%) appeared by the third day [18] which lasted until at least day 9, following the session.

Another study demonstrated that two hours following 40 repetitions of a leg press at 80% 1 rep max, glutamine levels in the quadriceps had been reduced by 34% in the type I muscle fibres, and 29% in the type II fibres[19].

As such, if glutamine homeostasis is altered, it is likely that the aim for muscle growth during these exercises will be limited. The resulting effect on performance could be reduced strength, reduced power, reduced endurance and longer time to recovery.

What Are The Benefits Of Glutamine To Me?

We’ve established the role of glutamine in our muscles, and discussed the risk of glutamine depletion following intense exercise. The next question is, “Can this be rectified with increasing glutamine intake? And if so what are the specific benefits I can expect?”

We’ll explore the potential benefits of L-glutamine supplementation below.

✓  More muscle gain
In combination with protein supplementation, glutamine has been found to assist an increase of muscle-protein synthesis by 8.3% (compared to protein alone, or protein with other essential amino acids)[22].

✓  Quicker Recovery
Glutamine has been found to reduce time to full muscle recovery of strength following exercise [23-24] and to protect against the negative effects of oxidative stress chemicals following intense exercise, therefore improving the beneficial effects of high-intensity training on muscle-protein synthesis[25].

✓  Less Muscle Wastage
When part of an amino acid stack, glutamine has been found to contribute to the suppression of the loss of muscle following periods of extended rest (e.g. post injury or surgery)[26].

✓  Feel less tired
Glutamine has been found to reduce the perception of fatigue in football players (in combination with L-carnitine and carbohydrate)[27].

✓  More lean muscle
In combination with intense training, glutamine has been found to assist increases in lean body mass[28].

✓  Improved Power
Improvements in initial rate of power production have been demonstrated by an improved vertical jump performance compared to a placebo supplement[28].

✓  Better Endurance
Glutamine has been found to improve running performance by increasing the time until muscular exhaustion[29].

✓  Less DOMS
It has been found to diminish delayed-onset muscle soreness[23-24].

✓  Better Immunity
Studies have found that it reduces the incidence of infection in trauma and surgical patients and also reduces the length of time spent in hospital[30-32]. Also, improvements in intestinal function and reduced susceptibility to infection in athletes during the post training period have been observed[17]. It may also restorate key immune system markers (e.g. T cell counts, immunoglobulin A serum) following heavy load resistance training reducing risk of infection post training[33].

✓  Improved Power
Improvements in initial rate of power production have been demonstrated by an improved vertical jump performance compared to a placebo supplement[28].

Where From & How Much?

Glutamine is considered ‘conditionally essential’, which means that at most times the body will produce enough for our muscles to function. However, the condition is that we do not place ourselves in a position where we are catabolic.

Intense exercise sessions can place us in such a position, leading our gains to be inhibited and increasing our potential to become ill. As such, restoring our glutamine levels when ever we train intensely has been shown to have a positive effect.

There are dietary sources of glutamine, which include beef, chicken, fish, eggs, beans, dairy products, cabbage, spinach and beetroots. However, many also like to supplement with L-glutamine in either powder or tablet forms, as consuming sufficient foods containing glutamine may be impractical immediately following exercise, during the timeframe when our glutamine is depleted the most.

In order to sustain a positive net protein balance and maximise the benefits of supplementation, orally ingested glutamine can start with 0.1g/ kg of body mass (e.g. 7g for a 70kg individual) and result in a 50% rise in the plasma glutamine concentration 30 minutes following exercise. Return to pre-exercise baseline concentration should occur 1-2 hours following ingestion[32].

Ingestion alongside a protein supplement and a BCAA supplement seems to provide even more superior advantages to glutamine alone[22, 26], which is perhaps another reason to add a glutamine powder directly to your post-exercise shake.

Studies have shown that oral ingestion of up to 28g per day for 6 weeks results in no adverse effects[36]. Furthermore, increasing post exercise dose to 0.65g/ kg of body mass (e.g. 45.5g for a 70kg individual) was also tolerated well by healthy individuals[36].

Glutamine is an important component of our muscles and if you’re aiming to exercise to improve the size, look and function of your muscular system, it may be advisable to consider taking a glutamine supplement.

If you’re exercising with sufficient intensity and often you run the risk of over-training, you could be at risk of limiting your muscle gain and increasing your susceptibility to becoming ill.

Consider using a glutamine supplement as part of your post-workout shake to minimise the detriment of glutamine loss and keep your progression from plateauing.

BCAAs | Benefits? Side Effects? When To Take? Dosage?

What Is Whey Protein? | Benefits, Side Effects & Dosage

L-Carnitine | What Is It? Benefits, Dosage & When To Take

The Secret To Fitness Success — Achieve Your Ambition