Blog > Training > We Tried A Floating HIIT Session, This Is How It Went…

As part of our #OwnTheSummer campaign, we’ve been asking you to test the limits of your usual fitness routine by trying out something totally new. That could be anything from a simple switch like training in the morning instead of the evening for a month, or something as bold as taking up kick-boxing as a new discipline.

Naturally, we jumped at the chance to get involved with this too — lead by example, right?

That’s why as part of a new content series, myself and Evie Howarth have put ourselves forward to get out there and put a load of alternative forms of fitness, interesting diet trends, and even some extreme sports to the test.

Last week, that meant taking to the water for a pretty unconventional HIIT session called ‘FloatFit’.

The class took place at Worsley Leisure Centre in Salford and was ran by Sheryl Mchale, an instructor for AquaPhysical — #1 water workout specialists.

“FloatFit classes are a 30-minute workout on water. FloatFit makes the most of water’s instability; the core is worked continually to stay balanced.”

We arrived not really knowing what to expect, but within minutes Sheryl made us feel right at home on our AquaBases, which are bespoke floating exercise mats. To begin the session, we got used to being on the board with some light balance work that first involved being on all fours on the mat, to standing up and shifting your weight from foot to foot. 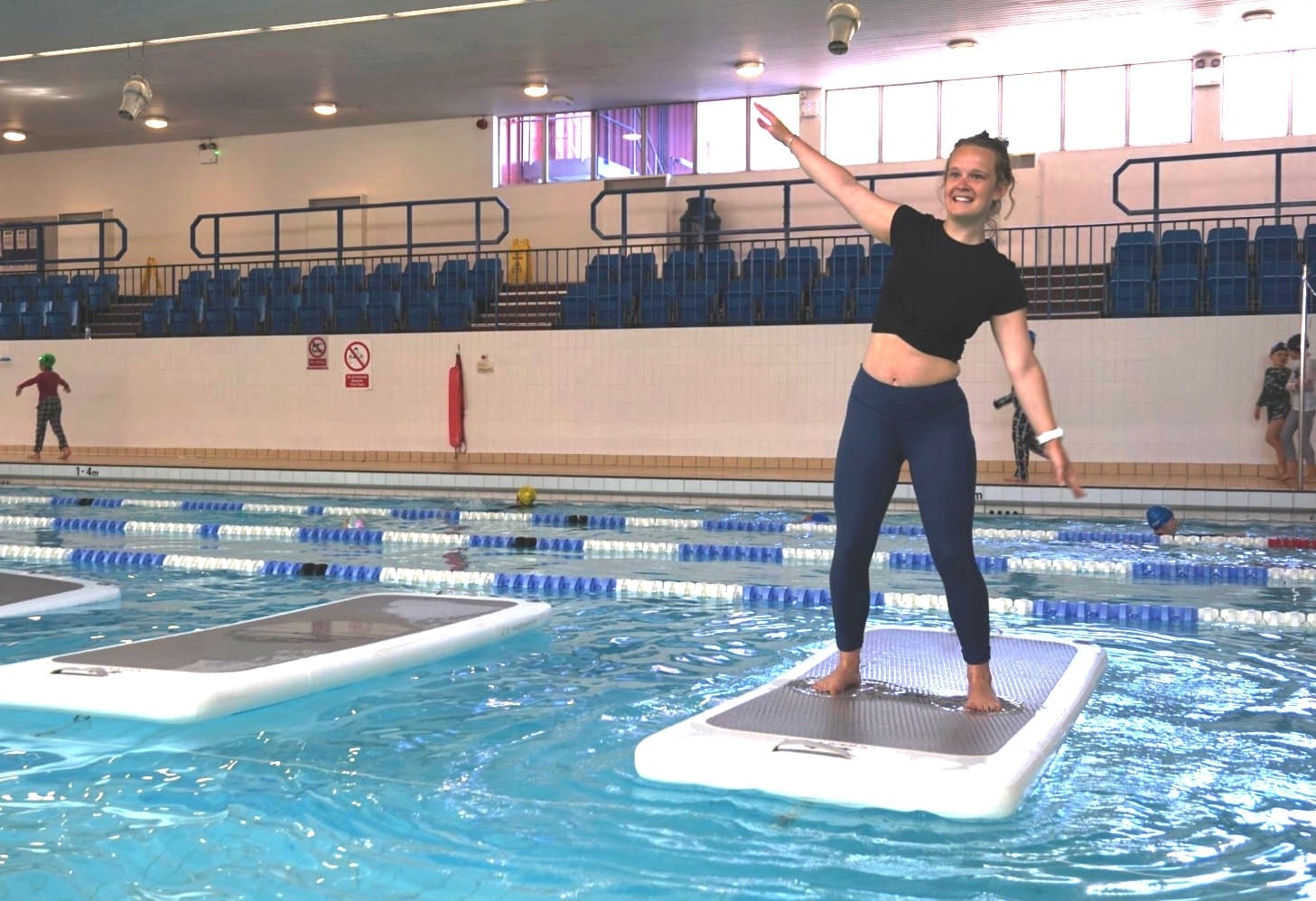 Sounds simple right? It actually took a lot of balance and core engagement to keep upright on the water’s surface. In fact, that was a running theme throughout the whole 30-minute session — our cores barely got a break!

Sheryl then had us blasting through a simple circuit of classic HIIT exercises — squats, burpees, V-sits and mountain climbers — which we were of course familiar with, but not in this format. It was like we were learning to do them for the first time, every slight movement took so much effort to execute without wobbling off the board and into the water (which did happen more than a few times).

Our burpee sets especially were painfully slow and shaky, and at several points during the circuit me and Evie turned to each other with glowing faces to share a grimace over how hard this was actually turning out to be. Any rest period was always met with a sigh of relief.

To finish Sheryl then had a particularly cruel “challenge” for us — just in case anyone had escaped being fully drenched up until this point. This involved splitting us up so that every other person in the line was an ‘A’ or a ‘B’, then one group had to rock from side to side to create waves in the pool, whilst the alternate people in between attempted to ‘walk the plank’ up and down the length of the AquaBase. Yep, things got splashy. 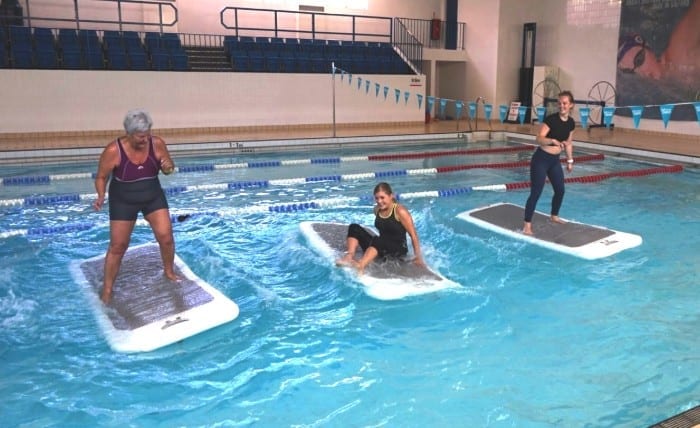 Finally, we spent a few moments stretching on the boards to end the session, and downward dog did actually feel great on the water. 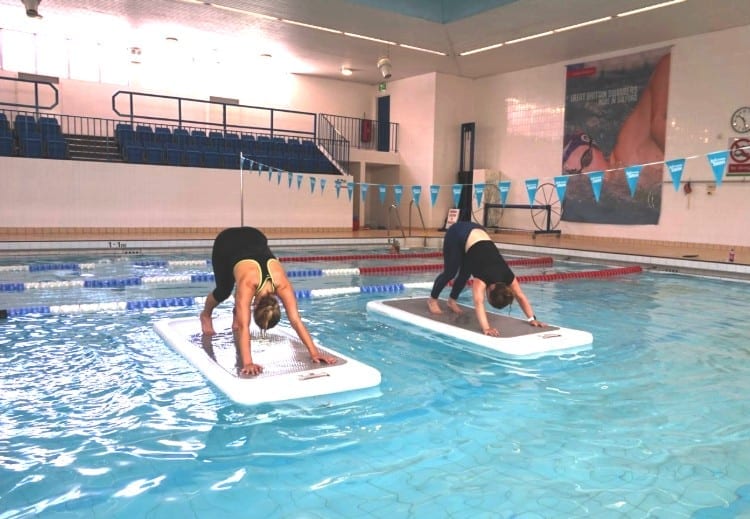 What the expert says

We caught up with Sheryl after the class to find out more about her and how she got involved with FloatFit. She’s a 39-year-old freelance fitness instructor from Bury, who’s not only a qualified personal trainer but a master trainer for AquaPhysical. 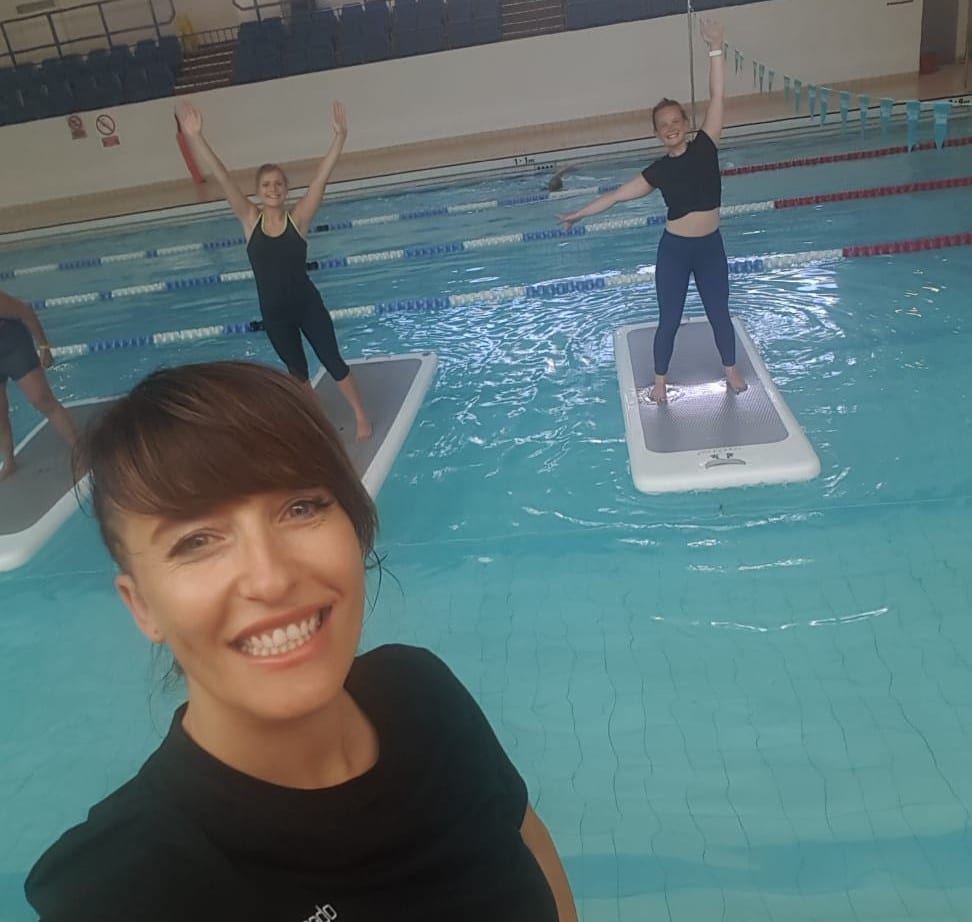 How did you first discover FloatFit?

I first discovered it on Facebook, about four years ago. I saw the video and thought I would LOVE to have a go at that and even teach it to others. I spoke to an instructor friend about it and then a few weeks later on a random Friday night the same friend rang to ask if I would like to go on the course with her.

Our boss had seen the video too, so she said we could have first monopoly of teaching the programme across centres in Salford. I was like, hell yeah!

Around November 2016 we went on the course and started teaching it the following September — it’s safe to say I waited a long time from first seeing the video to actually instructing!

What do you think are the main benefits of FloatFit?

FloatFit will give you a full body workout. It engages and challenges your core muscles and it improves proprioception (awareness of the position and movement of the body) and ankle stability.

My favourite thing about teaching it is that it’s just so much fun! And let’s be honest, not all exercise is fun. I get to see everyone laughing together while getting a great workout at the same time — what could be better?

Would you encourage more people to try FloatFit?

As long as they’re physically able, I’d love to see more people trying and coming to FloatFit. The minimum age is 8-years-old and it goes right up to the elderly.

We have the new ‘Grow’ workout which has recently come out for children, we have HIIT and yoga style workouts that can all be done while on the AquaBase. Don’t get me wrong, it’s not always for everyone (just like other workouts) but you should at least try it to make your own mind up!

On the face of it, FloatFit may look and sound like a bit of a breeze but it’s definitely not to be underestimated. It’s fairly low intensity, so great for people of all ages and abilities, but boy does it get your heart pumping and muscles working. The next day we could definitely feel a satisfying ache in our abs.

Want to give this water workout a go yourself?

There are FloatFit instructors and classes all over the country, just head to the AquaPhysical website to find one near you.

Is a Low Carb Diet the Best for Weight Loss?

Macro Calculator | How To Calculate Your Macros For Flexible Dieting & IIFYM